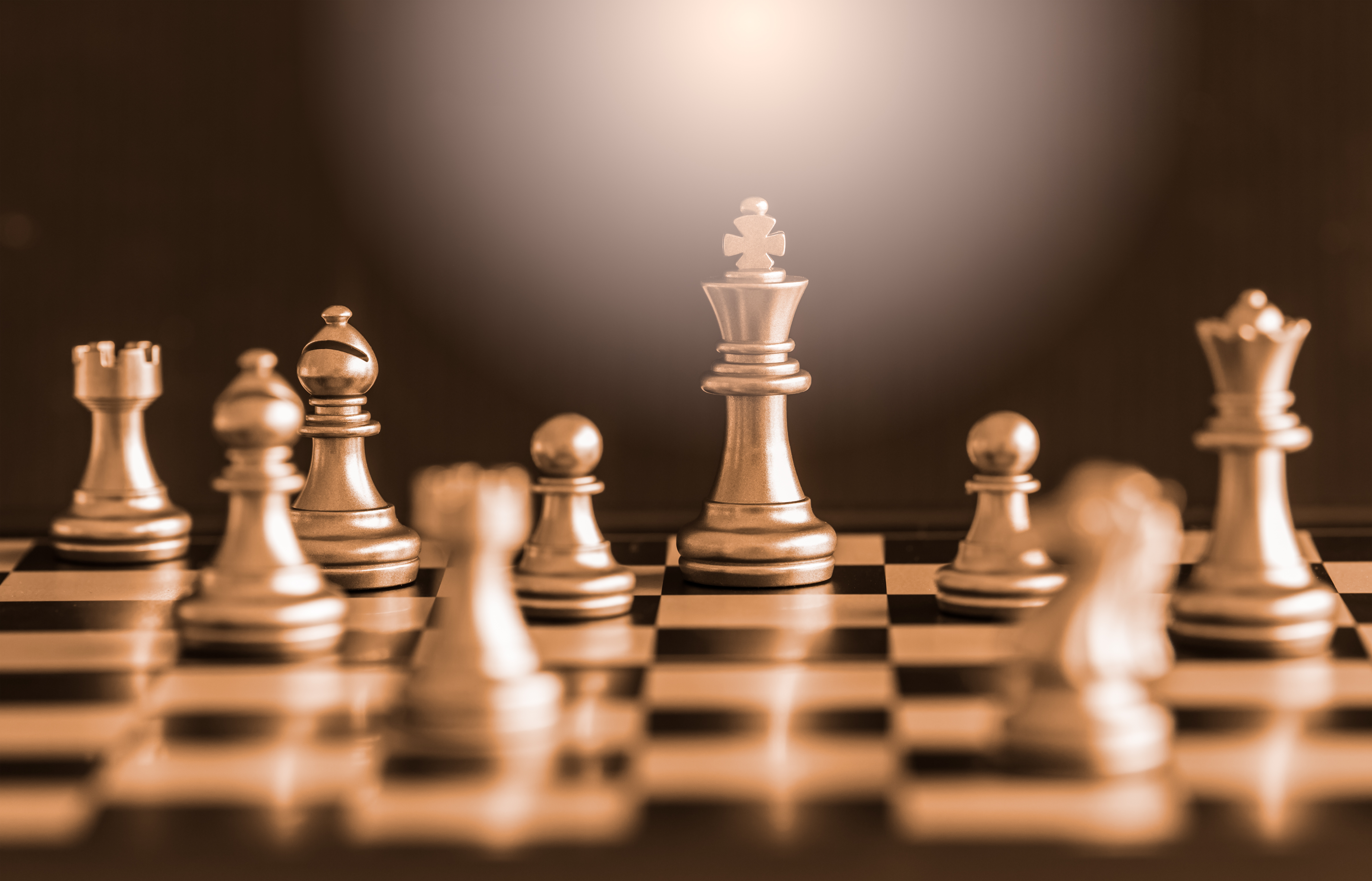 The World Championship match between the reigning champion Magnus Carlsen and the first US challenger since Bobby Fischer, Fabiano Caruana. What makes this match especially interesting is the fact that these two players are the numbers 1 and 2 on the latest Elo list with only 3 points between them. So, is the match going to be a simple coin flip? No, according to our analysis, Carlsen is a big favourite!

The Elo rating system is the traditional rating system developed by Arpad Elo and adopted by FIDE, the international chess federation in 1970. It is still a decent way to classify the players, but far from perfect. We much prefer Universal Rating System, whose calculations are much more sophisticated, as explained at their web site www.universalrating.com. We find their ratings to be much closer to our own power ratings and thus more reliable. While the expected score for any individual game between Carlsen and Caruana given by Elo is only 0.51 to Carlsen, it is 0.59 according to URS. A common mistake is to forget that in a match this expectation is applied to each game individually and needs to be multiplied in order to get a probability for a win in the match.

The reason to include the rapid ratings in the chart is that if the match is tied after 12 games, there will be a tie-break of 4 rapid games. In tie-break Carlsen is an even bigger favourite, with Elo expected score for Carlsen being 0.63 for each game.

An often-heard claim is that in a match you cannot trust the ratings blindly, and while the match psychology does bring some uncertainty, it is not clear that the advantage goes directly to the challenger, who may be hungrier, as some factors (such as experience) can be thought to favour the incumbent.

Historical score between the players

There are some notorious cases of nemeses in chess, perhaps the best known being the rivalry between Tal and Korchnoi, the results favouring the latter heavily. From my own experience I know that after some difficult games against a certain opponent, it becomes more difficult to suppress your emotions and play calmly. So, this can be a real thing between certain players. However, not between Carlsen and Caruana – their score (26.5-16.5 or 62% to Carlsen) correlates quite closely to their ratings. Their 10 last games with classical time controls, played in 2017 and 2018 have gone to Carlsen with a score of 6-4, so no surprises there either.

Grandmaster opinions on the match

Many a grandmaster has expressed his opinion on the match, for example, Giri has said that “Fabiano is not an underdog”. Caruana himself estimated the chances as 50-50 and Magnus said during the Berlin candidates that he hoped for Caruana to win, because he is the strongest player in the tournament. However, I think all the opinions need to be taken with a pinch of salt, as they do not have any experience in calculating probabilities and in some cases their personal relations with the players may affect their utterings. As for the players themselves, giving an impression of a tight match brings the match more media attention – and more money.

Carlsen has been ranked number one in the world since July 2011 and has the all-time record of 2889, while Caruana’s highest ever rating is 2851, so both of them are of course fantastic chess players. However, their respective styles are quite different, and they do have some strengths and weaknesses. Let’s have a closer look.

Carlsen’s style is considered by some as very technical and dry, but this is not completely fair. His technical wins do stand out, because he is the greatest ever technical player and is relentless fighter who does not agree to a draw unless all the possibilities in the position are exhausted. Apart from his technical superiority over his opponents, Carlsen is very strong when the position is not well defined positionally. He is also good at sensing which direction is the most unpleasant one for his opponent. He is sometimes considered as relatively weak in openings, but this is not true: his goal is to get a position where his winning chances are highest, and this often means getting his opponents to uncharted waters, where they cannot use computer analysis to level the field. Carlsen’s relative weakness is the play in very tactical and unclear positions and also defending against a strong attack.

Caruana is an extremely well-educated player with a huge amount of training hours behind him. This shows especially in standard position types and especially in openings where he is immensely strong. He calculates tactics well, although less so in games with faster time controls. He knows theoretical endings well, but in positional ones Carlsen is clearly superior to him. Still greater is the world champion’s advantage in positionally random play. The only area where Caruana is a bit stronger is probably the openings, but this advantage is relative especially in a match for which Carlsen has had many months to prepare. Carlsen traditionally has a much broader opening repertoire, which is also an advantage in a match. So, Carlsen is the stronger player and the situation favours him as well. Caruana’s main problem is that Carlsen will have more tools available to him than Fabiano in that he has larger repertoire of positions where he is stronger and practically no where he is clearly weaker. I personally think that Carlsen’s most likely successor is not Fabiano Caruana, but a star rising from the orient called 丁立人.

Carlsen is a big favourite to win the match. I would estimate his chances of retaining his title as approximately 74%. Mr. Green offers 1.43 for Carlsen’s win, making it a profitable investment!

For those who want to dig in deeper in the chess aspect of the match, I give here my analysis of some typical games between the two players. 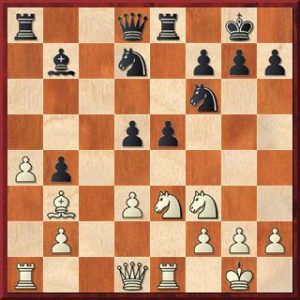 16.d4! [This reminds me of the famous game Réti-Yates and I think Carlsen knows this game too! In chess it makes no sense to invent the wheel for the second time and therefore the study of the classics is of utmost importance for a developing chess player. The present position also has some important differences with the Réti game and the consequences are less clear, but still knowing the previous example helps especially in the process of finding candidate moves. Probably Caruana knows the Réti game as well, but I think he still would not have chosen the game continuation.] 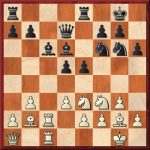 16…e4 17.Ne5! Nxe5 [Mikhalevski considers this inaccurate and White indeed gets a pleasant position after it – despite the pawn minus. Mikhalevski’s suggested exchange sacrifice 17…Rxe5! 18.dxe5 Nxe5 looks more to the point and would have led to a complicated struggle.] 18.dxe5 Rxe5 19.Qd4 Re7 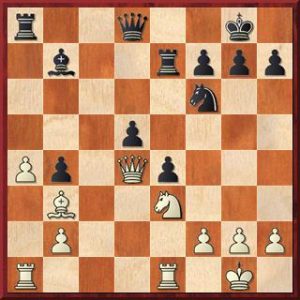 20.Rac1 [White’s intention was not to return the material balance with 20.Qxb4, since it would allow Black’s centre to become mobile after 20…d4. White’s deep idea is to keep playing peacefully and regain the pawn under favourable circumstances. Black’s problem is that almost all of his pieces are worse than their White counterparts.] 20…Rd7 21.Red1 h6 22.Rc5 Ra5! 23.Rxa5 Qxa5 24.h3! [Again, a peaceful move that slightly improves White’s position, while Black lacks useful moves.] 24…Kh7 25.Rc1 Rc7? [Caruana gets frustrated and enters a bad ending. Mikhalevski gives 25…Qa6, with the idea 26.Rc5 Qe2! , trying to disturb White.] 26.Rxc7 Qxc7 27.Qxb4 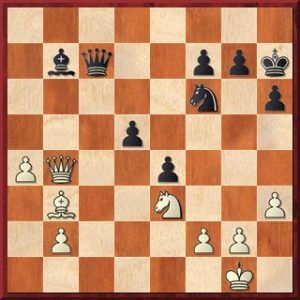 Of course, Caruana is extremely strong player as well, and Carlsen needs to beware of losing games such as the following. 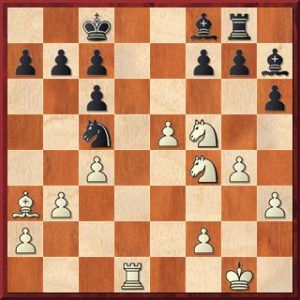 1.d4 [A relatively rare move for Caruana. In the match I expect him to play mostly 1.e4, since he knows the arising positions much better.] 1…f5 [A good way to take advantage of your opponent’s opening surprise is to take the game into a position which you understand better, while avoiding your most common sublines. This results often in a situation in which both players play slightly worse than normally, but the surpriser worst! The Stonewall is not Carlsen’s main weapon against 1.d4, but it requires deep understanding of the position, which is not possible to acquire during short preparation, so I like his choice. Against Caruana’s 1.e4 Carlsen has even played 1.e4 d5!?, which, however, is a little too risky a choice to my taste, but he did score 1.5/2 of those games, so maybe he knows what he is doing!] 2.g3 Nf6 3.Bg2 e6 4.c4 c6 [A small finesse, the idea of which is to be able to answer an early Nh3 by …d6.] 5.Nf3 d5 6.0–0 Bd6 7.b3 Qe7 8.Bb2 [8.Ne5 may be slightly more accurate. 8…0–0 (8…b6 does not work so well now that White has 9.cxd5 cxd5?! 10.Nc4!) 9.Nd2 a5 10.Bb2 Nbd7 11.Qc2 a4 12.Ndf3 Ne4 13.e3 a3 14.Bc3 Nxe5 15.Nxe5 Bd7 was seen in the game Anand-Carlsen, Baden-Baden 2015. Here 16.Be1!? followed by f3 might give White a slight pull. Anand played 16.xd7 and lost. This game has a lot in common with the main game: neither of the white players are regular 1.d4 players, Magnus surprised them with the Stonewall and won both games with his better understanding of the position – not by getting an advantage from the opening.] 8…b6 [Black delays castling in order to ensure the fianchetto (see the previous comment).] 9.Ne5 Bb7 [The bishop may appear dumb here, but Black can later play …c5, when it gains full activity on the long diagonal. One of the secrets of the Stonewall is that Black’s ‘bad’ bishop is by no means worse than White’s ‘good’ bishop on g2. The e5–square has been weakened indeed, but this alone is not enough to win the game. Therefore, White often combines the play in the centre and on the queenside, but here Black has a strong grip on the e4–square and on the dark squares on the queenside.] 10.Nd2 0–0 11.Rc1 a5! [Black seeks chances to play on the a-file. Additionally, now developing the knight to a6 looks more harmonious.] 12.e3 Na6 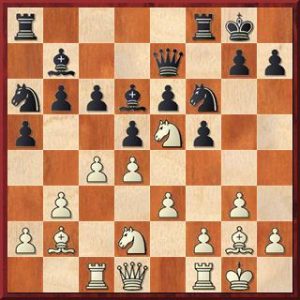 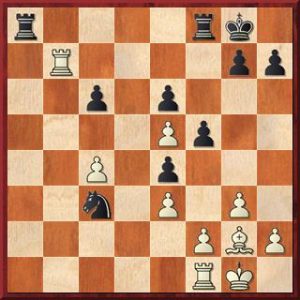 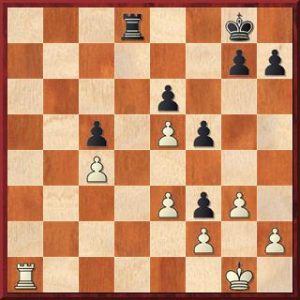 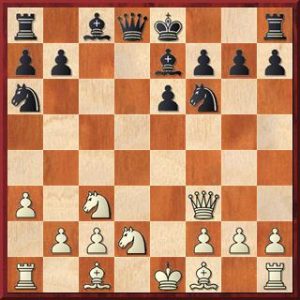